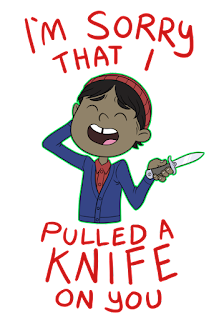 Well, it turns out that commuting and working in-house is not the way for me to achieve a balanced life. I've been working 10-11hrs a day (plus a 4 hr round-trip commute), 6-7 days a week which has left me pretty drained and with approximately zero time or energy to draw my own stuff. I did get to sublet a place close to the studio for four weeks, which cut out the commute and afforded me the time to sleep in a little, but it ultimately led me to work every single day since it was nearby.

I always get a little delirious and screwy a few months into working on a show, but I normally get to experience that in isolation and partially attributed it to cabin fever. This time around I'm in a studio full of people who get to witness my slow, steady descent into madness.

During one weekend work session, the idea that someone would do enough crazy shit to justify mass producing their own apology cards struck me as hilarious. Did I mention that I get a bit screwy? I'm sure this will be presented in court as Exhibit 01 sometime in the near future.