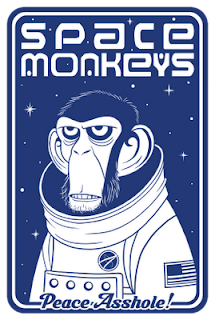 This was done while listening to the pilot episode of the Spacemonkeys podcast by Tell 'em Steve-Dave broadcasters Bryan Johnson and Brian Quinn.

This was done pretty quickly, but only after I spent ages on a prior, more realistic version. I like working in just one colour, the simplicity is refreshing.

The "Peace Asshole!" is a quote from the podcast. 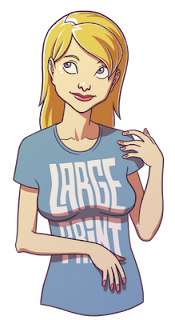 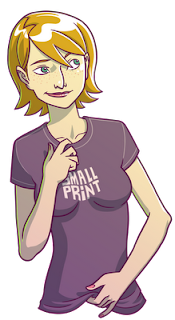 These two were intended to be logos that indicated that a t-shirt design was also available in small and large print. I'm going to go with a logo that is more graphic.

I've noticed that most people seem to like t-shirts with large designs. I'm definitely in the minority being more into small designs so I want to be able to cater to both types of people and provide both. 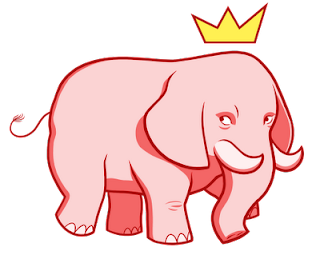 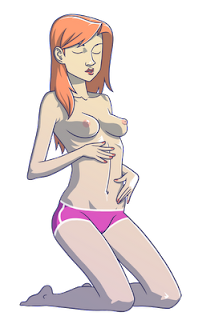 I pretty much gave up on this. I tried a bunch of different backgrounds, but nothing really suited it, which was a surprise to me because I thought that puffy nipples went well with everything.

Here's another demo I wrote. I had to sing very quietly into the microphone so as to not annoy the other people in my house, so the vocals are very breathy and sometimes out of tune. This one was also written very quickly; I find that if the ideas are to have any chance of developing they have to come out at speed. EDIT: Track removed
WWJD (demo) by Citizen Tang


Watching: Season One of the Original Twilight Zone

Reading: Demons by Fyodor Dostoevsky and Here, There and Everywhere by Geoff Emerick
Listening to: Dan Auerbach - Keep It Hid and She and Him - Volume One