Days of Pictures Past 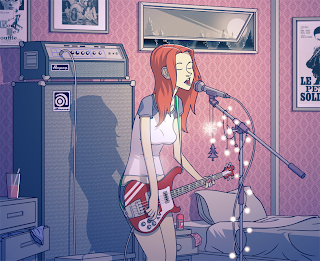 Three months into 2011 and I'm still clearing out 2010's WIP folder. I probably should not have taken this picture to completion, but I had reached the point of no return and finally did the background colours. This has a really weak composition and a more sterile background than I originally had in mind. Looking back, I should've squared the composition off and made it into a Polaroid-esque piece.

I think girl was actually drawn for the Paltroons Flyer, but it ended up unsuitable design-wise. 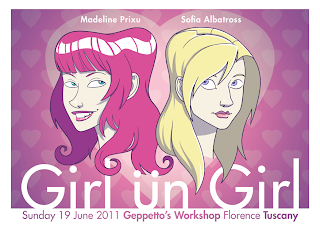 This is another one I had trouble with. I must have drawn and coloured Sofia Albatross 4 or 5 times over a period of months. Then after I drew the final version I struggled with the composition, which was originally in a portrait orientation. The moment I tried it in landscape everything clicked.
It's such a simple picture to get hung up on, but I like how it turned out even though it wan't what I envisioned. I dig Sofia's lips and Madeline's buck teeth.