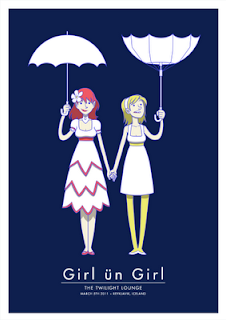 I'm not sure what I've been doing with my time, but I haven't really produced much in the last few weeks. This is a design that I'm pretty happy with, although I probably could have done a better job with the umbrellas.

This was originally going to be more elaborate, with rain and more colour, but I found that stripping the image down to as few elements as possible produced a more readable and eye-pleasing image. I was hesitant about using shadows, but I found that it kept things from looking too flat without being too distracting. 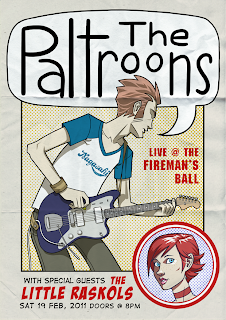 This is an old one that I've tried to finish many different ways, to the extent that I drew a couple different bass players with the intention that this would be a landscape oriented band poster. I also drew a few people to fill in the little circular insert.

The fonts look pretty ghetto because I didn't want to dedicate any more time to this than I already had. I'm not happy with the picture, but at least it's done and it strikes off another WIP from my 2010 folder.

I've got t-shirts for sale through MySoti and Zazzle. The shirt designs are slightly different between the t-shirt services. The Zazzle Rock shirt has a white border around it and the Zazzle Umbrella shirt has text below the graphic (which is also smaller).
EDIT: I've decided that the issues MySoti is currently dealing with make them unsuitable for my needs. I'm currently re-evaluating different services for t-shirts and other merch.
I wrote and recorded a quick song demo. Listen if you want and comment if you feel inclined. Time was of the essence so the playing and recording quality wasn't the best, I just needed to get the rhythm down so I wouldn't forget it. I used the mics built into a Zoom H4N to record myself playing an unplugged Gretsch 5120 with my fingers.
Trying, Lying, Killing, Dying (demo) by Citizen Tang