The Many Faces Of 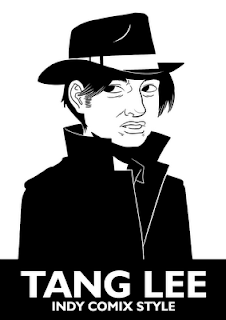 I've been trying to come up with a new ID/Avatar picture for forums and such so here are some of the self portraits I've come up with.

The first one was done in a Charles Burns-ish style. I read fewer indy comics these days, I think the last one I read was Wilson by Daniel Clowes.

I find them less appealing as I get older, the art is often split between over-detailed/clean or child-like chicken scratch and the stories often seem detached, like the cartoonist is standing outside the story and laughing. Earnestness is more appealing to me these days.

I don't want to come down on indy comics though, there are some great ones, but the 90% rule applies to everything after all. 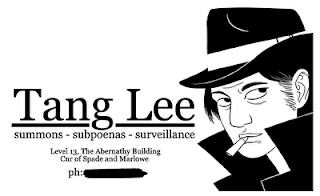 This one was done in a similar style but with a more idealized face. It's done as a business card, which I think looks okay as a mock-up, but in reality it would be pretty stupid for a professional sneak to advertise his face.

That was always something I hated about the James Bond films; why would a spy tell people his real name. It became so absurd that I came up the conceit that "James Bond" was a job title rather than a name, which would explain the different actors (I'm told this is now the case in the newer movies) but even then it would still be stupid. I guess I like my spies more Baer than Bond. 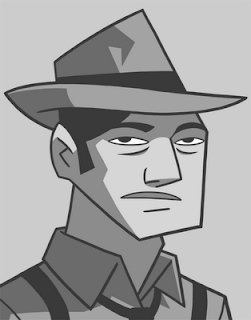 This one is a rather bland Stephen Silver-esque self portrait. I think the more "polished" I make my work, the more uninteresting and bland it becomes. I came to the realization that I want my work to still be amateurish, not in way that implies lack of ability, but in a way that maintains amateurish enthusiasm. I believe Francis Ford Coppola once said something similar to that effect.

It kind of works against me trying to work as a professional, and I find myself not polished enough to be "professional" and not loose/enthusiastic enough to pass as "artsy". Now I think of it, Coppola is also often put into the same boat. 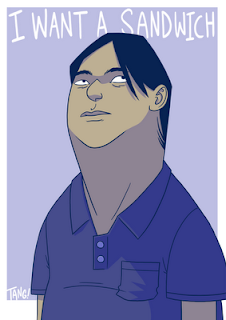 Me in a couple years time? It's possible. Sometimes I just like to play with shapes when I sketch and I guess out of that comes something like this. I always though that if my life were made into a movie I would like Philip Seymour Hoffman to play me.


Watching: Strangers On A Train by Alfred Hitchcock
Reading: Flowers For Algernon by Daniel Keyes
Listening to: V______ - The Wheels Of Progress