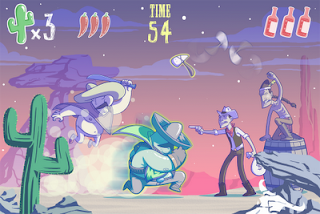 I'm bringing back Cactus Jack (cliche name I know), a character I came up with years ago while working on Bro Town in New Zealand.

My old flatmate Woric did some mockups for a 2D video game a while back that looked cool, so I decided to see what a Cactus Jack game would look like. I'm not a gamer anymore, but I used to LOVE side-scrollers. For me the zenith of 2d games are Metal Slug and Castlevania: Symphony of the Night.

This started out as just a character drawing and grew organically, but unfortunately the side effect of that type of growth is bad composition. I wish I had started out with a better pose for Jack; as it stands it's not clear who the protagonist is and the other guy with the sombrero confuses things. I could probably try to sweeten the picture more with all sorts of effects, but I don't think it's prudent to keep trying to polish a turd. 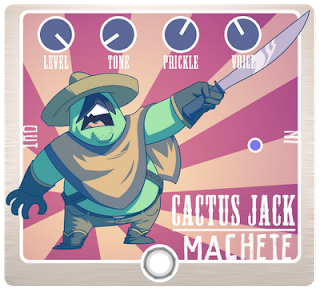 I've been watching a lot of demos recently about guitar effects pedals so this picture which also started out as a simple character drawing became a design for an overdrive pedal.

I'm not sure I even want an overdrive pedal, but sometimes I just want a little bit of grit without turning up the volume and overdriving my tube amp (which sounds better than any pedal) naturally.

Watching: Anvil! The Story of Anvil by Sacha Gervasi
Reading: See No Evil by Robert Baer
Listening to: REM - Automatic For The People
at 5:51 pm Labels: Illustration