My Name Is URL

It's been a while since my last post; since then I worked on an animated TVC where among other duties I got to do clean-up on two scenes that were animated by Robert Valley. It was pretty cool, since I've been a fan of his work for a while. I also just finished working as a Flash monkey on TV show, just doing production grunt stuff. Both jobs had a very short time frame and extremely long hours so my hands haven't been in the best condition. 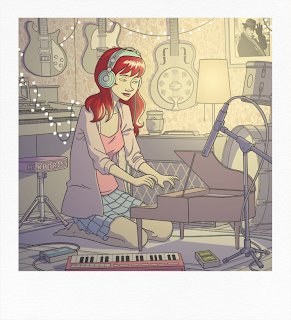 Yet another Girl ün Girl polaroid. I think I was trying to keep the picture loose, not framing the shot perfectly but I found out with this one that if I try to frame "off" it has to be off by a lot. I had to redo this picture a bit to remove some space from the red synth to Madeline and to give her more headroom.
I think the set dressing is a little lacking, but I like the lighting. I hate Christmas, but I love it when people use Christmas lights in interior decorating. 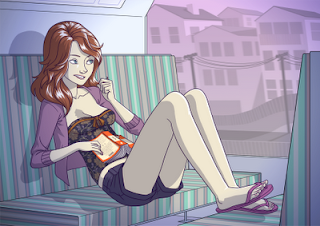 This was inspired by many girls I saw on the train on the way to work.One of the benefits of living in such sunny climes is the popularity of short shorts.

The book she's holding is Lolita by Vladamir Nabakov, which I have not read yet, but have included for obvious reasons. 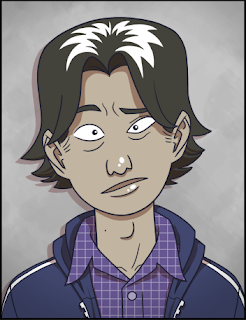 I guess this is the first post I've made since getting a proper URL. It was one of the many things holding up progress on designing a business card.

This picture was for the back of the card. I hope the design of the card is light-hearted enough for people to overlook the rampant narcissism on display. 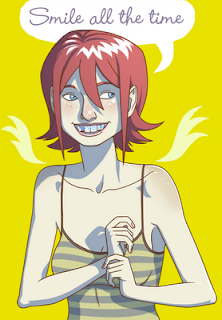 These next two redheads (I just noticed that all the girls I'm posting are redheads) have been in the backlog for quite a while, coloured, but not quite finished. I added word balloons with Wilco lyrics in them and declared them done. Both are just Photoshop doodles that I started while trying to avoid working on more complex drawings. Sometimes I just want to draw a cute girl with a goofy smile. 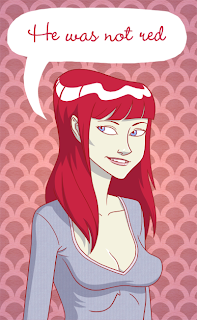 I've got quite a few pictures waiting for backgrounds or a little more finessing. I'm going to try to finish them before the year's end , but everything is dependent on the condition my hands are in. It doesn't help that I bought a ton of games during the Steam black friday sale.