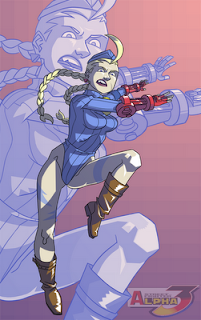 J-J-Jump!
These were all an exercise in digital inking. I sketched 4 of the 5 drawings very roughly (too roughly in some cases) in one brief sitting then spent the rest of the day inking and colouring. I've come to the conclusion that I can ink with the Wacom when the pencils aren't too loose, drawing in photoshop just seems too slow and uncomfortable to me; it feels like I'm pushing around lines as opposed to drawing shapes. 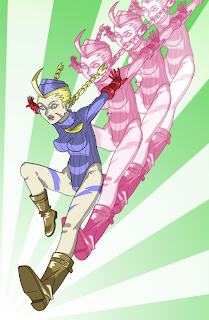 Kick!
It took me a while to come up with backgrounds for each drawing, at one point I was just going to stick them all on one page and be done with it. I've been checking out UDON's Street Fighter II Turbo comic drawn by Jeffery "Chumba" Cruz. I hadn't seen his work for a year or so, and it's gotten really good, it stands out from the usual UDON look. 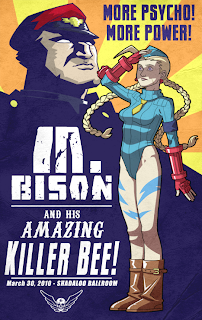 When in doubt, use a Soviet Sunburst. Overused? Yes. Effective? HELL YES! Fonts by BlamBot.

I think that Capcom was at it's peak in terms of character design during the Alpha years. Even janky characters like Rolento and Bridie looked awesome. Skinny characters were lanky, strong characters were imposing and Cammy was Cammy.

Chun Li + cankles = Chunkles
This was the first of the Street Fighter set and the only one that was fully penciled and funnily enough it is the most boring of the lot. 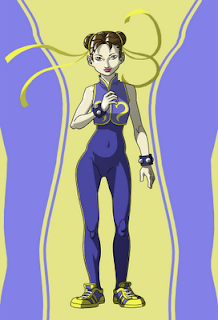 Your spiky wrists
Your bogus hips
Your rapid kick
I'm lovin' it
-from Chun Li, I'm Lovin' It by Man Factory
This is more like it. Epic hips, skinny legs, over-sized shoes. I much prefer the Street Fighter Alpha/Zero Chun Li to the Street Fighter II-IV version. I had lots of trouble with the face; front-on faces just emphasizes the asymmetrical tendencies of my drawing, and the Wacom made things even more frustrating.