I wrote this little comic in 2005-2006, I don't know when exactly, it was my post-animation school period, and I think that is reflected in the story. Most of my "stories" in that period were very open-ended, barely stories, more like vignettes. I was influenced by the films of the French New Wave and Jim Jarmusch who rejected Hollywood storytelling conventions and didn't feel the need to explain everything. 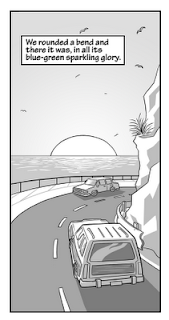 I penciled the comic in November, I intended to use it as a warm up exercise for a period of prolific comic creation. It didn't turn out that way. I spent a lot of time doing layouts, some panels I planned years ago when I wrote it (like page 1 panel 2 and page 2 panel 1) but I mostly just tried different shots till I got something I was 70% satisfied with (compromises had to be made as always) . 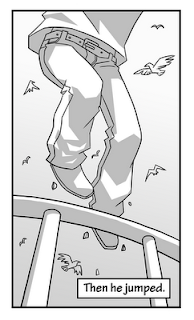 The way I lay a page out is very influenced by Will Eisner, who liked to have a page be a complete scene or end on a significant turning point in the scene. I think I managed to end each page in interesting ways, each page had a different function although the main goal is to draw the reader deeper into the story.

It was such a struggle to get the facial expressions and body language to be even close to what I had in mind, the car didn't look convincing and I don't know how to draw water. I also should have done character designs because whenever I make something up on the page it turns out very generic. On top of all that, I found page 3 panel 2 to be impossible to draw in it's original layout and had to change it from a high angle shot (which creates a dread of the cliff edge and water) to a low angle shot, which is maybe too dynamic, it causes the eye to move too fast to the next panel and takes away from the suspense. At that point I was just despondent and just wanted to finish it. That lack of enthusiasm resulted in the the last three panels of page 3 being just rubbish. I ended up redrawing them completely in Photoshop. I was so disgusted with my drawing, I couldn't bring myself to clean up and finish the comic.

Fast forward two unproductive months, I started writing again and did the layout for a four page comic. But as always, I was too scared of starting and as a way of postponing the actual hard work of drawing, I started to digitally ink The Ocean. It took a day per page and to my surprise, it started to look a lot better. I sometimes draw different panel elements on different pages, so I can resize and move stuff around later, so the inking process allowed me to see the pages in their more or less final form.

I originally had plans to watercolour/ink wash the pages, but it was pretty clear that I had no idea how, so I decided to use halftones. I put in the shadows and water (which I am actually happy with!) using different grey values. Now when it came to turning the grey into halftones, I couldn't get the look I wanted, so I just scrapped them, I was happy with the greys, no point in ruining them with dots. 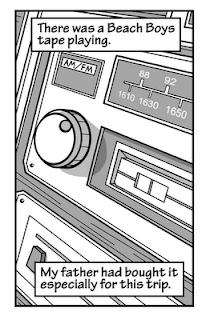 I lettered the comic using Tekton Pro, which is a bold font, I would have preferred to use the regular version, but alas, Adobe charges $25US for it. I am totally incompetent when it comes to lettering, but this was probably my best attempt so far. The main problem was that there would sometimes be a huge amount of text and I had up-sized some drawings during inking and had to rewrite bits so they would fit. 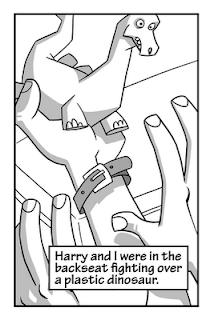 So after all is said and done, I think the comic is somewhat successful, the drawing could have been better and maybe I should have laid out the last 3 panels differently, but on the whole it communicates the mood and pacing I originally intended. Job Done.
at 10:06 am Labels: Comics