I hadn't really inked with pens since I started in animation and learned about the Clean Up process, so I probably should have tempered my expectations when I decided to participate in Inktober. Although I quit after 2 days, I kept inking sketches for a few days, each one made it clear that traditional inks were not for me.

Having recently picked up my laptop and Intuos tablet from my parent's house, I decided to give some of those failed Inktober sketches quick digital ink treatments. Going back to using an Intuos after months of using a Cintiq at work felt a little awkward, but I think I'm getting used to it again.

I think 1 & 3 came out okay in the end, none of them were particularly strong, but I consider them all to be superior to the traditional inks. 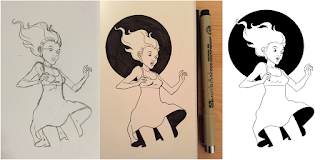