I had some dental work done this week (bridgework on a front tooth) and now speak with a lisp, like some pimply pre-teen with his/her first braces. It's really messed up my singing, and I think I'm gonna have to give it up if the lisp is permanent, which might also result in my quiting playing guitar too since the two are so intertwined. 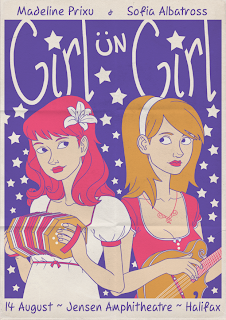 I drew the thumbnail of this while colouring the previous concert flyers. I'm pretty disappointed in the final product; I sketched it with a pencil, then inked it in Photoshop, but didn't fix all the problems. And although I did have a colour scheme planned, I didn't know what Sofia Albatross would be wearing, so it looks like some generic shirt. Now I think about it, I'm happy with Madeline Prixu, it's really just Sofia Albatross who looks janky. 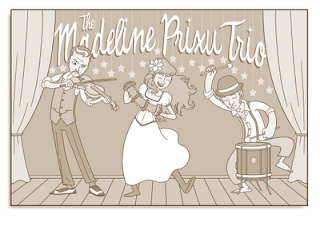 It looks as if some 17 year old girl drew this. I've really got to work on doing better backgrounds, this looks pretty blah. It was done 100% in Photoshop, which I'm finding to be very comfortable, but also very slow. 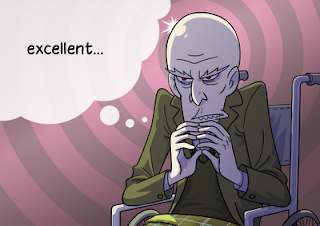 I used to be an avid reader of X-Men comics and always considered Professor X a sanctimonious bastard. To me, the most believable (manipulative warts and all) depiction of the character was written by Mark Millar during his Ultimate X-men run. In my version he's a crabby, lecherous old man, sitting in the shadows, manipulating people from afar.

Watching: Youtube videos by Lauren O'Connell
Reading: The Tipping Point by Malcolm Gladwell
Listening To: The Who - Tommy
at 1:01 am Labels: Illustration