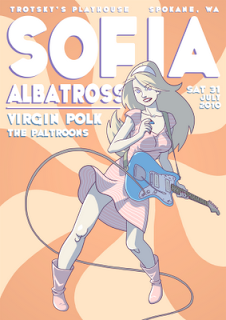 I spent a day last week doing a bunch of rough pencil sketches of people with guitars and after scanning them all I decided to make some band flyers. The drawings are pretty simple as always; although I am trying to get looser, but the really time consuming part is coming up with the names for the bands and venues and experimenting with fonts and placement. I really have no graphic design aspirations, so my typography is pretty bad.

The one above was the first I drew, but the last one that I finished. The guitar is a Fender Jazzmaster which is a guitar I've had my eye (and ears) on recently but will probably never buy. It's popular with surf bands but I associate it with Elvis Costello, Sonic Youth, My Bloody Valentine, Television, Dinosaur Jr and Nels Cline from Wilco.

Sofia Albatross was a name I came up years ago for a story I started to write, the story never got past a rough outline, but the name lives on. I plan to use it again some time soon... 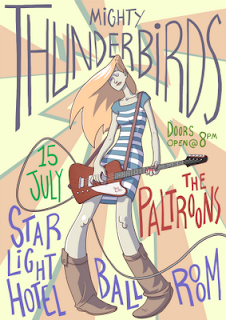 This one is inspired by Kim Gordon from Sonic Youth. This was the first I completed and I like the looseness of the drawing and the hand drawn text. The guitar is a Gibson Thunderbird Bass (hence the name of the band). 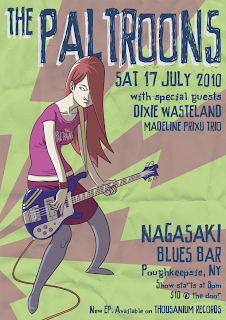 I was kind of inspired by Meredith Gran's webcomic: Octopus Pie when I sketched this girl out. I was unsure if I would ever let the Paltroons headline a concert, but I think they're ready. I think this flyer has the worst colouring and typography, but the best copy; I think it reads very authentically. I love the names of all the bands on that bill, especially the Madeline Prixu Trio. There might be more of Madeline Prixu in the future...

The guitar is a Rickenbacker Model 4300 bass. I added some racing stripes because The Paltroons need the extra speed.