During The Rapture There Will Be Devils 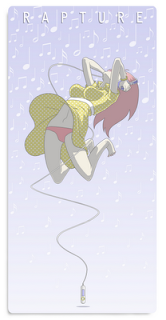 I use a random word generator to brainstorm ideas for stories (like the Horse story), but this time around an image came to mind and here it is.

The word was actually ENRAPTURED (verb, somewhat uncommon), but I like to run these words through dictionary.com to find multiple meanings and discover the etymology behind the word.

That mp3 player is an albino version of my black Sony NWZ-B143F that replaced my older Sony player which I had used 10-12hrs a day, every day for two years before it died. Lots of good music went through that little gizmo and I guess the picture is about how I feel about music.

I had this one in the backlog for a few months, I was surprised how much I liked it at the time considering how quickly I sketched it. Now it's "finished" and I don't like it too much, maybe I'll redraw the legs. 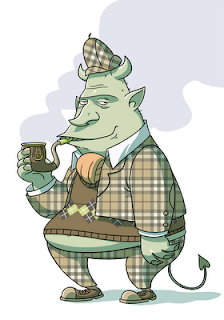 Who's this dapper chap? I had a lot of fun drawing this. It was drawn pretty quickly, and I guess there are a few mistakes, but I still like it. 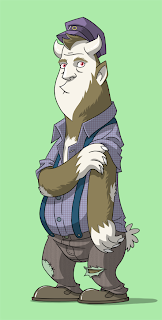 I drew this after being frustrated by another devil drawing I was working on. The only thing they have in common is the fur. I liked the rough pencil sketch but I think the clean/coloured version is a little bland. 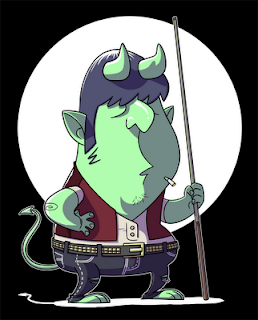 This here's a devil inspired by Johnny Ramone. The pool cue was inspired by The Rolling Stones documentary: Gimmie Shelter, wherein the Stones hired the Hell's Angels as security for a free festival who promptly delivered quick "justice" upon the hippie crowd (and a musician) with pool cues.

Watching: Hot Fuzz by Edgar Wright and Jeff Tweedy: Sunken Treasure
Reading: And The Ass Saw The Angel by Nick Cave
Listening To: Television - Marquee Moon, The Raconteurs - Consolers of the Lonely
at 12:53 pm Labels: Illustration