Love Is A Drug 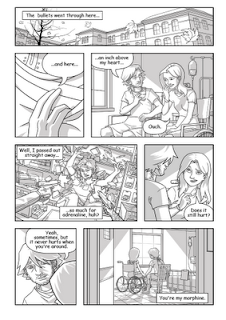 Well, this didn't go according to plan. I always envisioned this in a Tommy Lee Edwards 1985 brush style but that that wasn't a very realistic expectation. I dragged this page out far longer than I ever intended; it was a very start-stop affair, I started drawing this in mid February and completed five of the seven panels pretty quickly. Then I tried to draw the establishing shot, got frustrated and start working on something else. I would try to get back into it, but my attention would wane and I ended up drawing panel one and four weeks later directly in Photoshop with the Wacom tablet. I don't think this comic works very well but I'm not too disappointed, it was a throw-away idea anyway, I mean, how can I attempt to write about love if I've never experienced it? It's just shmaltz.

I laid the page out with the lettering planned, but during the process of digital inking and compositing, I moved stuff around a bit which resulted in the lettering ending up a little disorganized and it left no space for the title. I used Tekton Pro Bold for the lettering again, I should really try to find a new font or make one up for next time. I created the word balloons with a method I learned from Nate Simpson's blog, it's a simple and effective way of working.
(EDIT: I changed the font to Comic Sans. Yeah, THAT Comic Sans.)

I wanted to use solid black shadows, but chickened out again, it really is something I need to plan in the layout stage and carry out through the pencils and inks. I think I need to do another Mignola style comic.

Despite my dissatisfaction with how this page came out, it caused me to remember something very important (especially in 1-8 pagers) about page layout: every page needs a focus and it needs to show in the panel composition. The layout of this page is boring, everything is too even and the panel heights are too similar, this tells me that there is something wrong with the way I am telling this story.

Watching: McCabe and Mrs Miller by Robert Altman and It Might Get Loud by Davis Guggenheim
Reading: The Sundance Kids by James Mottram
Listening To: Swamp Dogg - Rat On
at 8:06 pm Labels: Comics