More narcissism. I've been contemplating getting an Epiphone Casino, the guitar most commonly known as the guitar John Lennon and George Harrison used to play. McCartney also mentioned that if could only have one guitar it'd be this one. So here's me in my own Beatles-esque rooftop performance: 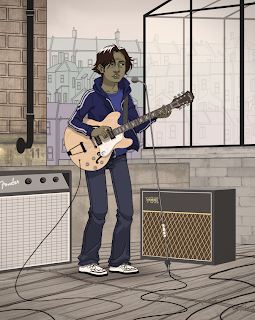 I don't think the guitar is available in this colour since I based it on John Lennon's Casino, which he sanded the paint off of.

I'm in the habit of sitting down to draw in the afternoon and colouring all through the night and it's easy (in the wee hours of the morn) to make the mistake of getting caught up in details and losing sight of the whole. The next morning (or noon) is usually spent correcting mistakes. I made the mistake of not cropping the page, and I ended up with a composition that isn't ideal. The biggest mistake was that I made a background for it at all since I think the picture looks better like this: 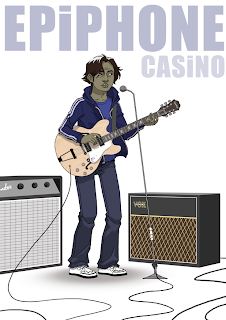 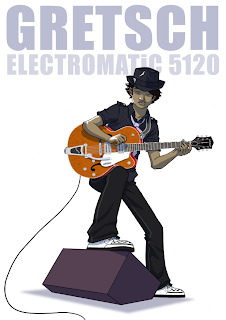 ACHTUNG! Guitar talk ahead:
Here we have the Casino head to head with the Gretsch Electromatic G5120 (I'd prefer it in White, which is a rare colour, but I wouldn't mind it in a classic-Gretsch Orange). It's an entry-level version of the Gretsch 6120 which is a Chet Atkins signature model. The Pros and Cons of the two guitars pretty much even themselves out:

The Casino has great P90 pickups, pinned bridge (easier to maintain) and is cheaper than the 5120, but has a front facing lead-jack and no Bigsby Vibrato.

The 5120 is loud even when unplugged, has a floating bridge(holds tone better during vibratos), a Bigsby Licensed Vibrato and is very popular for modifying, but has mediocre humbucker pickups (I prefer single coils).

Aesthetically I prefer the single cutaway style of the Gretsch and I'm uncertain if I prefer the technically superior Alnico P90 pickup sound of the Epiphone to the Gretsch-buckers (which I'd swap out for TV Jones Classics eventually). The P90s have a great chimey sound and fuzz up nicely, but Gretsches have a twangy bite to them. I'm not really a huge vibrato-person but I like the fact that's it's available on the Gretsch. 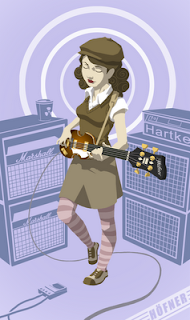 To continue on my Beatles jag, we've got a cute little Höfner Bass (albeit a right-handed version, sorry Paul) running through a Hartke amp head and Marshall stack. I really hated this drawing for a long time (from scan to character colour) because of the kind of janky forced perspective. I made the mistake of not pushing the perspective enough. That's kind of what characterizes my personal work I think, a mediocrity born of fear/laziness/ignorance. It's weird because I push the poses and designs of my commercial work pretty far. Is money the motivator? Na, I'm pretty sure it's just me not wanting to look like a hack in front of other artists.

Next up we have a Coles Phillips-style fade-away girl. I found this sketch in my junk folder and just tooled around with it for a little while. Unfortunately I didn't have a book title that could provide subtext to this drawing (because it's just a meaningless sketch or in other words: there is no text, therefore there is no subtext) so I just wrote in the name of the audio-book I was listening to at the time; Blue Beard by Kurt Vonnegut. Audio-books are awesome, especially while the hands are busy doing tedious things like doing clean-up or using Photoshop. 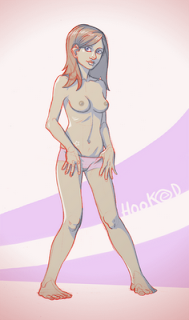 Last up is just a quick sketch I threw some quick colours and a vignette on. I read somewhere about a thing the kids do these days where they make little bizarro-tattoos by masking off an image on their skin and jumping in a tanning booth. This leaves an image/pattern of pale skin. I thought this was a pretty ingenious way of having a non-permanent reverse-tattoo. Those crazy kids, what'll they come up with next?