Finally! I recently bought my first DSLR camera, a Canon 50D which I stuck a Canon 50mm f/1.4 on the front of. I was considering waiting for the 60D which is probably gonna come out March '10 but man, life's too short and I've got a lot of free time on my hands now that I'm unemployed. The series I was working on for the last 20 months is finally wrapped and will probably air in about a month. Finally!

I'd been playing with my 50D for about two weeks before I took it out on the town. I shoot fully manual, manual focus, aperture, shutter, iso; so some, who am I kidding, all of these shots are a little (or a lot) out of focus. All but the last shot was taken on the fly while walking, I haven't yet grown the cajones to stand around, pointing my camera in people's faces. 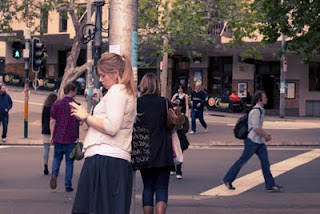 F6.3, 1/100, ISO 400, Light curves adjustment in CS4
This first shot was taken outside Central station, I wish I could've panned a little left and gotten that guy on the left in the shot fully and focused more accurately. The DOF is so shallow on the 50mm and makes critical focus very difficult. I'm used to adjusting the aperture and shutter (although not below 1/25) on my HV30 but ISO is something I never really thought about before now. 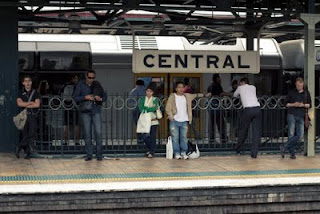 F5.6, 1/100, ISO 400, Light curves adjustment in CS4
Not Impressed! The couple in the middle are giving me the evil eye, but I don't care, I'm really happy with the composition and the poses. I added a slightly blue curves adjustment in the first two shots with CS4, which I kind of regret. 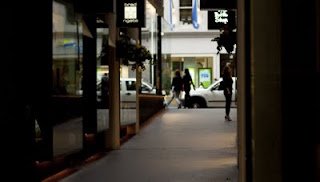 F2.8, 1/100, ISO 200, cropped
Waiting around for another friend outside of Ivy on George St - $20 all you can eat sushi? Hell yeah! Totally out of focus, this shot and the next were taken so fast I'm surprised they aren't motion blurred to hell. Even after analyzing this shot, I still don't know where I was focusing. 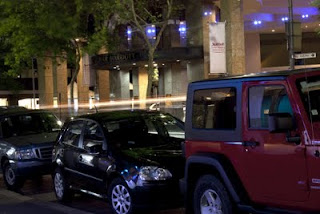 F20, 6 sec, ISO 200, Aperture +0.7 in ACR5
My first (successful) long shutter photo. Taken on a Joby Gorillapod, it took around eight photos before I got the right combination of Aperture, Shutter and ISO (the Gorillapod was slipping in the first few too). Like I mentioned before, I'm used to operating a video camera, so my shutter is pretty much stuck on 1/50 and higher. My hands are pretty shaky too, so shooting at 1/15 and slower results in slightly blurry shots.

I'm still trying to figure out how to not have blown highlights at night, is it possible? Feasible? Preserve highlights and lift shadows in post? I still don't know, but I was taking faster shutter/higher aperture photos and the highlights were destroyed. I think the only highlights blown in this shot was the window in the far background on the left.
at 8:33 pm Labels: Photos