Here are some sketches I drew and coloured while over in Auckland. God, I wish Mike Mignola would quit working on movies and stuff and get back to drawing Hellboy, don’t you? The last Mignola-drawn trade paperback, Strange Places, had a cool vibe, but lacked the tightness of visual storytelling found in the previous Hellboy books. 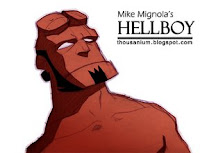 Hey, who doesn’t love Tom Waits? I bought his first album, Closing Time a while back and to my surprise, he had such a sweet voice before he purposefully degraded it with alcohol and cigarettes to get his now trademarked sound. I wonder if he can still sing the way he did on that first album? The same thing with Bob Dylan, his voice has gone through a few changes since he stared, even in the beginning (or technically, the end of the first Act of his career) on Nashville Skyline where his voice is almost unrecognizable. 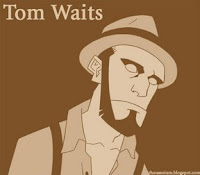 “Not if I don’t see you first, sonny”. The Life Aquatic is peppered with great lines like this, delivered in such great performances. Wes Anderson seemed to get a lot of flack from some critics and I’m not sure why. Wes Anderson is film’s J.D Salinger; he creates such great self contained worlds for his characters to live in. They’re not REALISTIC, but they’re BELIEVABLE, which is more important. I hate the way most people in film and comics use the term realistic as some great goal to aspire to. The name of the game is DRAMATIC NARRATIVE, heightening the dramatic and emotional sensations found in real life in the form of an entertaining story. 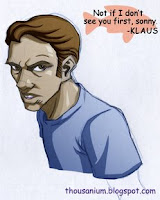 I drew this dude the day a friend of mine, Munro left the studio we worked in to do a film course. Munro has this afro you could see over the top of his drawing board, so I drew this fella here. Not to be confused with that piece of crap Afro Samurai (especially after waiting four years for it, I don’t want to get into the specifics of why it was so bad because I could go on for days about it) which had early designs and a rumoured pilot by Takeshi Koike whose “look” I kind of stole here. 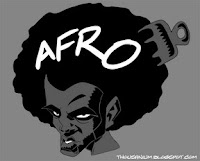