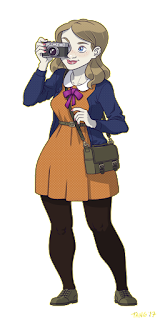 It's been about a year and a half since I used my DSLR, but I've recently gotten the urge to buy a new camera and take photos again. A big part of why I stopped taking photos was that my DSLR is a hassle to carry around, so I'm looking into getting a smaller Fujifilm mirrorless camera. Although, that might just be an excuse to justify spending money on something I don't need.

September hasn't been a productive time for me. I dedicated days to sketching but ended up with nothing really clicked. I kind of brute-forced the drawing above into existence. Once I started to add colour it became apparent that the bow was a mistake, but there is something about it that made me keep it.