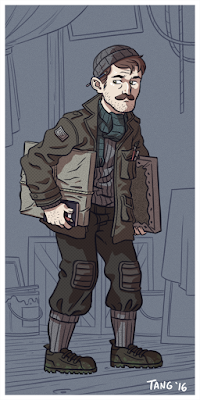 This one is an oldie, it was drawn months ago and was waiting around for another character and background to pair with it, but after a few attempts I kind of forgot about it.

I just wrapped on my last show and am in that brief restless/blissful period before I start on a new show. Gonna try to catch up on sleep and watch some of the movies that have been piling up.
﻿
Watching: Sicario by Denis Villeneuve, Edge of Tomorrow by Doug Liman
Reading: The Dispatcher by John Scalzi, Hellboy In Hell Volume 2: Death Card by Mike Mignola
Listening to: Alejandro Escovedo - Street Songs of Love, Jenny Ritter - Raised By Wolves, Chuck Prophet - Soap and Water, Chris Walla - Tape Loops, Depedro - El Pasajero, Nick Cave & Warren Ellis- White Lunar
at 11:12 am Labels: Illustration