I've got blisters on my fingers! Well, finally bought a Gretsch G5120 Electromatic hollow-body guitar on Friday. It's been two days and I think the honeymoon is over. 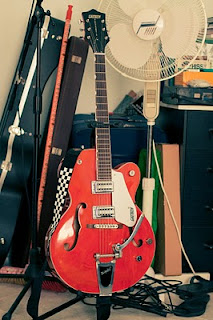 50mm, F/2.5, 1/40, ISO 100, Curves Adjustment
Don't get me wrong, it's a great guitar and I have no regrets about buying it (where's the buyer's remorse?). It looks good, sounds good (and is almost as loud as an acoustic when unplugged), but it's really hard to play. That's partly my own fault because:

1: I'm not familiar with playing such a big guitar with such a tall bridge and tall pickups.

2:I decided to do the setup myself, which is not a big deal until you realize that I haven't so much as re-strung my old Stratocaster, it''s been two years and I'm using the same strings that came with it. 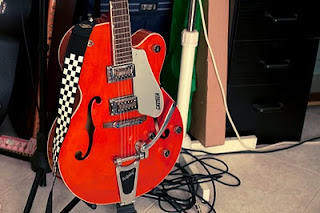 Most hollow-body guitars including this one have a floating bridge that's only kept in place by the string tension and the store doesn't set the intonation. This basically means that even though the open string is in tune, the other frets are off pitch. Intonation is simple, lengthen or shorten the length of the string between the 12th fret and bridge by moving the bridge up or down the body.

There are different methods to check the intonation, and I tried them all, 12th fret harmonic, 5th & 17th fretted, I think I got it close, but it's not perfect. It doesn't help that the low E string isn't tuning properly. 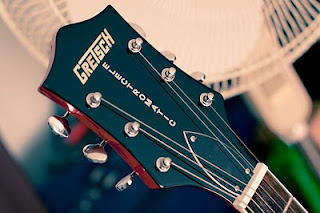 50mm, F/2.8, 1/20, ISO 100, Curves Adjustment
Another part of the setup is setting the action, which refers to the height of the strings over the fretboard. Low action is comfortable to play but causes fret buzz, and high action has a nicer tone but is harder to play quickly.

I'm almost strictly a rhythm guitarist, mostly strumming chords with minimal picking; okay, this means that I should set the action a little high. Now, how high is high? 5/64" what the fuck is that? The trick is to set the action high enough to not get a significant amount of fret buzz but low enough to play comfortably. I'm still figuring this out. 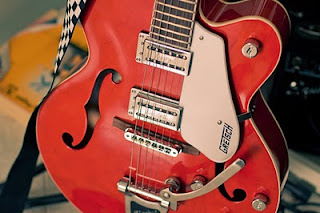 I might end up just getting a pro to put new strings in and do a proper setup, but I don't think the music stores around me have any experience with Gretsches.

The store I got it from apparently only carries one in stock at any time, so it's a display model, no box/case candy. I got a really cool looking strap but it's kind of flimsy and the strap-lock on Gretsches are known to break so I'm not exactly gonna be rocking out as hard as I would with my Strat.

I also bought a totally ugly, but strong and functional Ashton hard case, it was really cheap, 1/3 of the price of a Gretsch case which I would have had shipped to me, but damn it's ugly. Oh, there's the buyer's remorse.