I've been going through some old scripts and stories I've written over the last 5 years or so, there's a lot of stuff I don't remember at all, and funnily (or disturbingly) enough the "best" stuff were things I wrote in a spare moment without much thought (which is why I had forgotten their existence/s). Most of the stuff is kind of bland, pretentious and/or corny, but there are a couple of ideas that I still find interesting. Maybe this means I'll stop procrastinating and actually draw a comic... 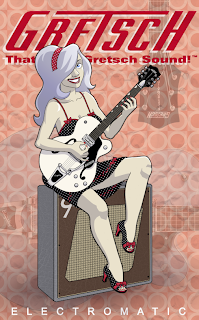 One of my biggest (and the most physically damaging) procrastination is playing guitar. I jammed with a couple of friends this weekend and it pretty much guarantees my hands will hurt a lot for a week or so. My hands will get better if I rest them for a few days, but I find it pretty hard to keep my hands off my guitar after jamming, especially since I keep my guitar right next to my drawing board.

Ah, the Gretsch 5120 Electro-matic hollowbody, you will be mine someday...
But not today. Although it's very reasonably priced, I'm not going to buy one anytime soon. I currently play a bottom-of-the-line Fender Squier Stratocaster, it sounds thin and is two frets shorter than a regular Strat, but it's probably the right guitar for me right now, a Gretsch would be wasted on me, I don't have the skill to make proper use of it. 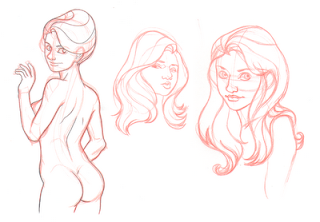 These ladies were drawn with a Prismacolor Col-Erase Vermilion pencil given to me by After Effects artist: Colin Bigelow. I scoured the KAPOW! studio on a search for Prismacolor pencils, but alas, I only found one Blue pencil behind a drawing board. Colin took pity on me and now I'm a happy camper. I previously used Carmine red, but I think I'm converted to Vermilion now, it shows up a little less vibrant on a scan but it looks great on the page.

I've been trying to order some Prismacolor pencils, but they seem to be unavailable in Australia and Amazon won't ship them here. I've found one supplier that will ship to Oz but when I tried to order some, they didn't have enough in stock (which is fair enough; I did want to order a LOT). 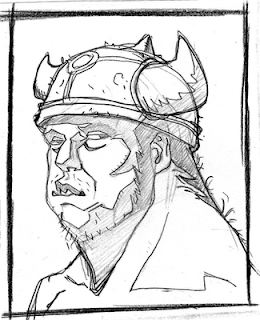 I think I've posted some designs of this character before. It's a character for a One page comic I've been meaning to do for ages. I've had problems trying to get him to look right, either he looks okay, but kind of generic; or his look suits the story but the design is plain.

Watching: Beyond the Valley of the Dolls
Reading: The Ikea Catalog
Listening To: The Stooges - Raw Power, The Smiths - Strangeways, Here We Come
at 11:19 pm Labels: Illustration, Sketches